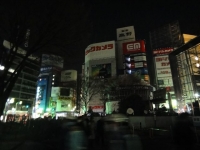 Aftershocks has been going on. I’m scared. When the first shake occurred, I was at Bic Camera(the electric store) near Shinjuku Sta. Because of so many luggages were falling down, I guessed it’s not trifling matter but I didn’t expect such a terrible earthquake. It is said this is the biggest one in our recorded history. I can’t imagine how painful the people who are on disastrous situation. I hope as many as people as possible who suffered injury could be helped in short time. 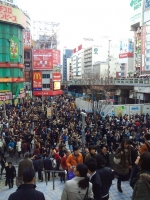 People crowded in front of a Vision Signage at Shinjuku sta.
After the shaking I stayed Takashimaya department store to kill the time, but I noticed there’s no possibility to recover the train network in the day so I decided to go back home on foot, I walked from Shinjuku to Kichijoji and it was taken over 4 hours. The Koshu Road(a trunk road) had really crowded by people who back home. I surprised so many people were buying bicycle but actually it is an reasonable way compare with the cost for staying a hotel or using a taxi.
The earthquake is taken up as a top news on world broadcasts, but I feel something strange with mostly programs focus on casualties of of Tokyo.(The mainly damage suffered on Northern east part of Japan.) Still, it is horrible the earthquake is not occured directly underneath the Kanto region. That is the other one, would be occur. I’m going to prepare for such a situation like how our family is going to contact each other. I need to do this, earnestly. 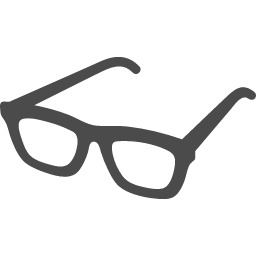